I admit that I have some weird obsessions. Like that phase I had with downloading every single font in the entire world wide web. Seriously. And I’d excitedly shriek at friggin’ fonts on TV.

My latest obsession is Microsoft Visio. It’s uh-mazing. Haha! Ok, it’s nothing extraordinary except that I’ve gotten pretty good at making wireframes with them (thanks, gandang guro!). Haha! I had no idea what wireframes were prior to becoming web editor of Candymag.com. I always started out with an image (for a header, or for a background, whatever) and then bahala na yung layout. 😛 Hahaha! 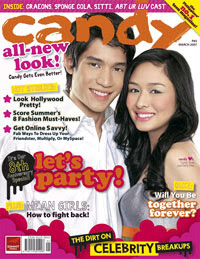 OK. Before I scare you away, I have to squeeze in a quick plug. Hahaha! If you get a chance, do get a copy of the March issue of Candy with its all-new look. There’s a blog special there (by me, ahem. haha) you might want to check out. How to up your “web cool quotient.”

It’s so funny that two other magazines have gotten me to write for them about all things web. Haha! Guys, I can write about stuff other than the Net, y’know. 😛 I’m just saying. Thank God they were all different topics and I didn’t end up just repeating what I said in the other articles. Haha!

P.S.
I finally uploaded my supersampler pics! I like Fuji film better than Kodak. And boo, I think there’s something wrong with my lenses!

Everything on this page is created by me unless otherwise stated.

knew I could count on some cheesy reads to get me

is the universe trying to tell me something here?

my faves got married today 🤍 the funnest weddin